Musicians - a sketch in progress

Salve,
in this post I brought  into this blog  the prints of de Bruyn - particularly the Polish-Lithuanian Commonwealth horsemen. In this sketch, nota bene I am using my older sketch just to play with the idea, well, here I am going for the horsemen-musicians from XVII century. There is still lots of work to be done here.
Apparently the trumpeters or buglers  and timpani (horse drummers) (in Polish cavalry we called them ''paukers'') were part of every winged hussar cavalry banner,  or the period iconography and surviving documents lead us to believe such was the situation.

They were paid and were armed, since they could be fighting too, and they were busy on the battlefield playing out their part in the military operations and fighting. From the information provided in this regimental roll (record of enlistment from 1659-61)  you can see that the Western style cavalry  or Foreign 'Autorament'/Contingent (reitars) regiments  in Polish armies of XVII century a  ''pauker'' was part of the regiment's headquarters while trumpeters were attached to each company, so the regimental drummer in this particular example gets 2 as much salary as each of the companies' trumpeters.
I intend to draw some reitar musicians too, some day soon.

Perhaps the most colorful trumpeters, due to the color of their uniforms and also horses and their tack, can be seen during the Napoleonic period. 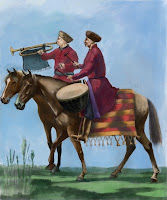 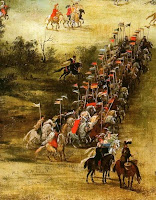 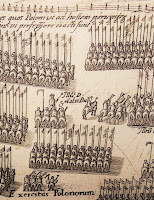 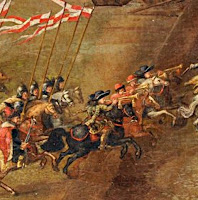