Salve,
today's dzhigitovka or dżygitówka is a name for the trick riding involving some superbly trained mounts and athletic, superbly fit riders that show their skills in controlling their galloping or cantering mount while performing various acrobatics on and off the saddle.
It might have had its origin in the Pontic steppe and survived amongst the various equestrian people of the Caucasus Mountains region, and during the XIX century it has been 'appropriated' by the Russian Cossacks.  But it seems to have been part of the Roman cavalry training and many other equestrian cultures practiced it, especially the Hungarians, Alans, Tatars, Persians, Kurds, Berbers, Arabs, and the Turks etc, since this demanding equestrian 'sport' had clearly the military origin and served military purpose of increasing levels of horsemanship and dexterity with weapons while on horseback, as seen  in this 1840s painting showing Kurdish and Tatar riders showing their skills. 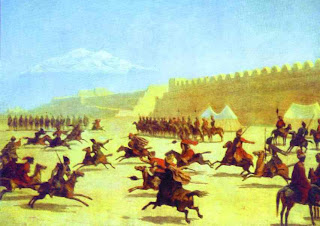 Old Poland during the Jagiellon Dynasty and later during the Commonwealth was a melting pot, and many noble families form the Caucasus settled in the Kingdom, including the Circassians, from whom the Russian Cossacks most likely learned their dzhigitovka.
I think this style of trick horse riding might have been the preferred way of showing their equestrian skills amongst our horsemen, especially the younger ones, since we hear nothing, via the sources,  about the American rodeo style competitions taking place among  the horsemen of Old Poland.
We know, again from many period writings, that the beauty of riding and management of one's steed along with that horse's level of collection and its own physical perfection (conformation)  were much appreciated by the contemporaries, and often commented upon, from the Middle Ages onward; and even XIX century Polish writers, who were still immersed in the Old Poland's Sarmatian culture,  still wrote  about the prowess in horsemanship as a sign of the ancestral nobility and martial spirit.

In pre-World War II Poland the cavalry regiments took pride in showing off with trick riding clearly visible  in this miraculously surviving video uhlans show off  their horses and their dzhigitovka moves in 1937 Warsaw.
So I sketched one - just for fun and rather quickly