Salve,
I would like to share my latest discovery of sorts - a more that 20 drawings XVI century drawings  showing Renaissance warriors, horse harness, armor and horse tack Victoria and Albert Museum in UK.

I must say that I love the European Renaissance period for their armor and paintings, and also because, a little  sadly, during this period the artists-armourers  sung their swan song when comes to the knightly armor.
well, nevertheless, before full armor suits gave way to courtly dresses of French court and uniforms of Louis XIV armies, there was this period of great flowering of knightly fine arts and design, especially in Milan and Nuremberg. Goldsmiths, painters, designers and sculptors worked on the final stage in the development of European knightly armor, because of the Renaissance interest in the Antiquity and its arts, they started decorating armor with Roman and Greek ancient fashions.
One of the most famously known workshops was  the Milanese armourer Filippo Negroli shop/atelier   en.wikipedia Filippo_Negroli , example of his work Burgonet alla Romana Antica   - I could not more warmly recommend a  book, produced by the Metropolitan Museum of Arts, titled Heroic Armor of the Italian Renaissance,  you can get it from the net eg amazon.com/Heroic-Armor-Italian-Renaissance-Stuart , full of scholarly articles on the subject of XVI century armor and  illustrated with prints, paintings, photos of actual armor, and drawings of actual designs.
In that book I came across drawings of Filippo Orsoni, little known Italian painter and designer,  showing  a fanciful rider dressed for a horse masquerade/parade or horse carousel. Another drawing shown in that book was a designed set of armor of alla antica type (nice introduction in this MET article with bibliography   metmuseum.org renaissance armor ) for the dashing French monarch Henri II (got to write one on the fine chivalrous king), in this painting he is still   a dauphin of France, dressed in wonderfully adorned half-armor riding a curb-bitted  but  very fine  gray stallion with tied-up tail in a equally splendid war saddle: 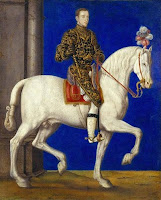 This small painting was done by a famous portraiture painter Francois Clouet en.wikipedia. Clouet  is one of several paintings showing Henri II riding his horses,  the king who was known for his passion for horses, hunting, war and one beautiful mistress.

Finally, there is the link to the Victoria and Albert Musem album, well, small part of it, in their display.
Please note you will find on page 18 see a hussar-costumed rider ridding a fine horse, wearing a plumed shishak, armed with a painted lance and Balkan shield; also a Turkish rider and an armoured knightly rider; and a chart showing a war horse depicting potential equine illness - all and all fine drawings, too bad only 20 out of 306  vam.ac.uk filippo_orsoni
Posted by Dario T. W. at Tuesday, December 07, 2010

That Orsoni "catalogue" is highly interesting.. one can even discern differences in horse tack between the Turk/Knight/Hussar combination ( note for example the cantle shape) hmmm...

Thanks a milion Dario,
Samuel

It is a treasure, and imagine there are 260 more images from his sketchbook or catalogue. I like the brush and ink armor pieces shown at the V&A museum webpage,
I will draw a Turk, the hussar and perhaps a knight based on these drawings, since I cannot publish them directly, for the museum does not want its collection shown by anyone but themselves. I guess that is all right by me - :)