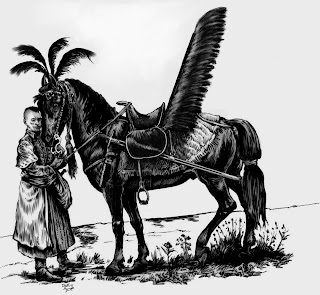 Rumak (Polish nobles rode stallions to war)  is saddled with a 'siodło usarskie' (hussar war saddle) of mixed Central Asian, Ottoman Turkish, Crimean Tatar and Italian provenance with a Tatar-Polish stirrup,  a smaller Turkish or Tatar 'czaprak' (shabraque) underneath the saddle, while the horse  is a bitted with a curb-bit. There are weapons too, a set of wheellock pistols, most likely German in manufacture, and a long armour piercing 'koncerz' ( tuck) attached to the saddle.  Feathers on his poll, feathered wing at the saddle, and a buńczuk - horse tail (Turkish-Tatar tug/kutas) - at his throat completes the picture..
Posted by Dario T. W. at Friday, January 15, 2010