Zygmunt III king of Poland and grand prince of Lithuania 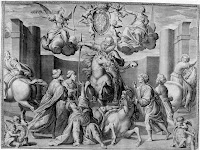 I found this image of our king Sigismunt III Vasa on wikipedia. We know now, based on the primary sources of his reign, that he was the first to receive the newly bred Spanish Andalusian Horses from the studs in Cordoba and Austrian at Lippica, his wife's family, the Austrian Habsburs, were the givers/ senders of these horses. We had used to call them Dzianet, after Jennet Genette, prior to the Corboban breed being established (AD 1576-9), so naturally they kept calling them 'dzianet's from Spanish 'el jenet', genete etc, as 'rumak' (from Turko-Persian argamak) was still reserved for the Oriental horses. Perhaps in this print Zygumunt III rides a Cordoban Spanish stallion, celebrating his armies' victory over the Turks at Chocim (Khotin) A.D. 1621.

Note that Richard Brzezinski et late Angus McBride (painter) reconstructed a winged hussar wielding a hussar lance (plate depicting Vienna AD 1683) in the same manner as Zygmunt here, in their Osprey book "Polish Armies 1569-1696" vol1. Perhaps the print was their inspiration, and obviously wrong, as the hussar lance or kopia was many between 3,5m to over 6meters long. Impossible to hold this lance in this manner. My friend Radek Sikora writes about the hussar lance in his articles accessible at http://www.hussar.com.pl/162/husaria-cz-3-radoslaw-sikora accidentally in this particular article there is my own drawing showing a long lance wielding hussar attacking a pikeman, circa AD 1626-33.
Posted by Dario T. W. at Saturday, March 28, 2009