I have been a friend of one hell of a painter (and musician) from Poland - messer Dariusz Bufnal from Wrocław, Poland - Facebook page here.

I have Dariusz' permission to show on my blog one of his latest brushwork, in his maker's intent and execution  sort of a  window into the XV century borderlands of Silesia, Lusatia, Bohemia and Saxony. Where Polish (Silesian Poles), Czech, Sorbian, German, and Pomeranian nobility and noble clans intermarried and mixed in the plethora marriage and political alliances, adopting language and coats of arms.
The castle-tower and medieval manor of Witkow, Lubusz land and today in part a Polish voivodeship(most lays in the Federal Republic of Germany) belongs to that medieval borderland tradition.
In this painting, one of three painted for the current owners of the castle-tower,  provides a depiction of the Central European  knights from the late XIV and early XV centuries.

here, on canvas,  we have two brothers von Warnsdorf, Frantzko and Nickel, and their retinue in process of leaving their castle to take part in the Great War 1409-11 ( the Teutonic Order, Sigismund of Luxembourg and their  knightly guests with retinues  against the  Jagiellonian realm - kingdom of Poland and grand duchy of Lithuania) . They have the same coat of arms  - Leliwa - as Polish Kingdom and Silesian duchies clans. In the history of the castle you can read why von Warnsdorfs had Leliwa coat of arms. 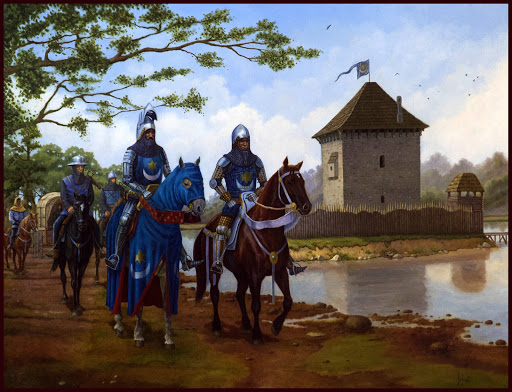 The painting was executed in oils on canvas.
Dariusz Bufnal pinxit and all copyrights et al.
ps

maestro Dariusz also painted plates for Trzy Swiaty Sredniowiecza, a study-book on the medieval castles and fortresses from Lower Silesia, written by Grzegorz Kiarszys - Dariusz' Art Station link to some of those plates.