Salvete omnes,
the battlefield in the Tollense river valley in north-eastern Germany ( Polabian Pomerania or  the lands of the bellicose Polabian warriors) - middle to late Bronze Age. - amazing discovery of the oldest known European battlefield.
Speaking about the civilization perspective then it can be said that the battlefield comes from the period  after the end of the Unetice Culture (especially in Greater Poland & Silesia), the closure of the Tumulus Culture ,  the early Urnfield Culture, and the beginning of the Lusatian Culture in Central Europe, while in the south there took place the Trojan War and the Sea People invasions, and the subsequent collapse of the Bronze Age great civilizations of Greece and Anatolia, hence roughly from the XIII century B.C.. Also, interesting aspect of this time period and archeological perspective is the existence of the tin, copper and especially  the amber trade (the Amber Road - good map here) between the Mediterranean civilizations and the south shores of the Baltic Sea, that had been developed during the Unetice Culture and would last until the Middle Ages.
The Trojan-Baltic angle has been explored as a hypothesis by Felice Vinci in his book The Baltic Origins of Homer's Epic Tales. ( eg . audio recording of a discussion Felice Vinci & William Mullen here) 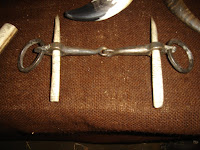 some English language articles:
Slaughter at the bridge: Uncovering a colossal Bronze Age battle - Andrew Curry, Science Magazine. - there is a very odd 'reconstruction' of the 3 warriors in this article.
A Bronze Age battlefield? Weapons and trauma in the Tollense Valley, north-eastern Germany by Thomas Terberger et al. - from academia. (also here)
Bronze Age tin rings from the Tollense valley in northeastern Germany by Oliver Mecking et al. - from academia. 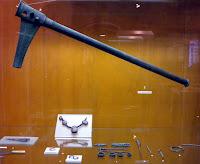 Blog article including an interesting and quite animated discussion - Old European Culture blog.
Even this article from Deutsche Welle (in English).
A German documentary  Schatzsucher in Mecklenburg Vorpommern - there is footage from the actual excavations.
audio - an interview with Andrew Curry, Science Magazine.
Also, in Warfare in Northern Europe Before the Romans: Evidence from Archaeology by Julie Rosemary Wileman there is a chapter on the warfare in the Middle to Late Bronze Age in Northern Europe.
enjoy
Posted by Dario T. W. at Tuesday, October 10, 2017