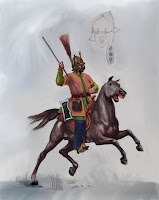 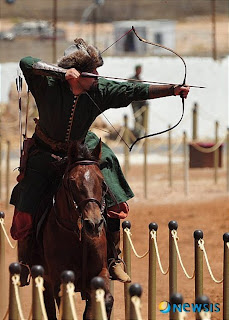 ....
At the head of this post I attached a work in progress of an Ottoman XVI perhaps early XVII century cavalryman with a 'cirit' javelin (GIMP and MyPaint only )
...
Images of cirit players and horses from present Turkey via google images
..
Anatolian Horsemanship Committee page has some info, including a page on Anatolian horse sports and an article and diagram of Turkish horse tack etc..
..
enjoy - :)
Posted by Dario T. W. at Friday, October 21, 2011

Thank You Dario for interesting post. This is very valuable info, because most people believe, that cavalry in antiquity (B.C.) were mainly skirmish cavalry and only few people are interested in effects of javelins from horseback. This can be used as parallel. I think Christian Cameron tested against hoplite panoply and said, that 30 m is effective kill range of horsemen with javelin against footman. In this book https://www.amazon.com/Hippeis-Cavalry-Ancient-History-Warfare/dp/0813318041/ Worley says effective range for javelin from horseback is 30-60m. I have to test it myself:)By the way, what's the source for that scabbard for sabre and two javelins? Brilliant idea how to solve practically holding of weapons. I have another idea for historical fiction or serious work about military history and for reenactment!

Pavel - u la, la - you are reading my old posts - thank you !
Chris Cameron has done lots of fantastic work in his reenactment and his novels, especially the Tyrant & Killer of Men series.
The set - palash and javelins - comes from the Russian Grand Duke of Muscovy collection https://commons.wikimedia.org/wiki/File:Drevnosti_RG_v3_ill115_-_Dzhirit.jpg