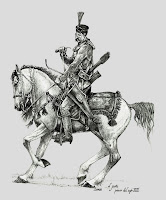 Many years ago when B.Clinton was US president and in Poland there was comrade Alexander Kwasniewski presiding from the Warsaw's Belvedere Place, I did a series of drawings of Polish noblemen on horseback, or rather some horses with their riders pretending to be Polish riders.
Historically correct they were not and definitely on the fantasy side, yet I had lots of fun drawing them using various Pigma micron pens and watercolors. I did clean the drawing and changed the color of the Background with GIMP and PS.

This image is supposed to show one over-armed szlachcic (nobleman) of the early XVII (17th) century.

He is wearing a Hungarian style 'magierka' (headgear), a type of hat very popular with Polish nobility between 1560-1640s (more or less), a short 'zupan' (zhupan a riding coat of ancient Iranian - Sarmatians, Scythians - nomads provenance), and riding boots where the heel was of iron and shaped like horseshoe (R. Brzezinski writes about this Polish footwear in his Osprey's book – Polish Winged Hussar). The stirrup suppose to be of a Polish type, based on the Tatar stirrups – most Polish riding gear was based in the Caspian-Pontic steppe traditions.
Under his left leg he is carrying a pallasch (a Polish Palasz) a fearsome broadsword that had its origins with the Sassanian, Turkic, and Islamic knightly traditions. I drew a Tatar looking sabre that was usually carried under the bow case. He is carrying a 'nadziak' in his right hand, a fearsome weapon indeed.
Bow case ( 'sajdak' or 'sahajdak' in Polish) is a fantasy piece, the same with saddle, although it is very loosely based on the original saddles of the time period. Horse tack is a bit fanciful but especially towards the end of the 1600s Polish horse tack became more Oriental (Tatar and Turkish). The horse tail (tug or kutas) or 'bunczk' (bunchuk) hanging from the horse's neck was adopted early in the 1500s by the Polish horsemen, and was often dyed red and adorned with colorful silk cords, gold, silver and precious jewels.
By the way a big or small mustache was a must for a Polish nobleman - His Royal Majesty King Jan III Sobieski, Prince and Marechal du France Prince Jozef Poniatowski, and Conqueror of the Soviet Russia Marshal Jozef Pilsudski are the most famous examples of that continuous fashion that lasted from the early medieval Poland until the mid 1990s. Even today it is the part of traditional Polish male appearance, although not in fashion that much with the young bucks.
Posted by Dario T. W. at Wednesday, August 12, 2009

After reading this post I feel as if you might be my favorite writer. Useful articles give knowledge of polo horse riding boots.

thanks - by the way - fabulous boots & shoes :)
but do not send me more advertisement , pretty please - :)