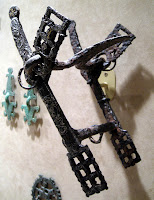 Salve,
we went to the MET today, to see the Afghanistan treasures of the Bactra-Margiana, Saka and Kushan eras (hope to address these in the future posts), and also the old medieval drawings (I will do a post on some nice drawings I found at the exhibit dating to 12th century AD Turnai, France), and passing by the Byzantine art section I took some pictures of a curb bit dated between 600 to 800 AD (Anno Domini or Christian Era), an example of early Medieval art and following both the Persian and Sogdian traditions of the Sassanid era and prior ancient Roman traditions.

The bit is beautiful, inlaid with various motifs and nicely preserved - it was found in Spain, and most likely is of the Byzantine provenance, perhaps it was traded or captured by the Visigoth or Moorish conqueror of Spain, as the times were very tumultuous.

The horse's bridle  must been attached via these 2 rectangular movable pieces attached to the bit mouthpiece's 'rings.' The reins could have been attached to the surviving rings on the mouthpice or down below at the end ot the shank, where there are two rein rings welded to the shank bar. It looks as if the purchase was not attached directly to the bridle, as if in the ancient 'psalion'/cheekpieced bit. It was  quite powerful device of control, most likely used on a mount destined for war and close combat.

One day  I shall do a drawing of this bit as could have appeared  when placed in a horse's mouth etc ...