Early modern spurs from Bonifacio Veronese's Adoration of the Magi

Salve,
La Serenissima had ruled her multiethnic empire until Bonaparte extinguished her completely, but her lands, between the foothills of the Alps, isles, plains and valleys of  Dalmatia, and sweet scented mountains of Crete and other islands of Greece were fertile grounds for intermingling of styles and types of weaponry, horse equipment, costumes and fashions. Artists working within her territories, especially in Venice close vicinity,  left ample evidence of their familiarity with their neighbors (Turks, Hungarians, Germanic folks) and subjects (Slavs, Greek, Albanians).

So let us give a quick look at two sets of spurs from an early modern (early XVI century) painting by  a Venetian artist  known as Bonifacio Veronese or Bonifacio de' Pitati. 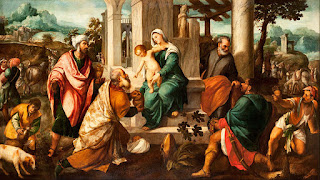 The photos of the painting are not very sharp (via Wiki Commons),but one can see two types of these fine equestrian tools of late Medieval/early modern cavalryman

In short, these spurs belong to the long tradition of the Medieval riding equipment; the same tradition would live until our very modern age.
and some other images that are interesting