Salve,
today we will do a quick landing in the beginning of the XVII century, in the Holy Roman Empire, precisely in the Rhine valley, where at that time existed various states ruled by elector-princes.
I would like to turn your attention to two such princes count-palatine (comes palatinus) or Pflazgraf of Neuburg at al., and the prince-elector (princeps elector) or Kurfürst of Palatinate and king of Bohemia  - the images of horse and his rider are in the ancient traditions established already by the Greeks and Romans 2000 years earlier, cultivated by the Medieval chivalry and eventually the early modern riding schools and their noble pupils. Sort of a bridge between the ancient tradtion and modern horsemanship 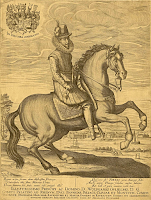 Count Wolfgang Wilhelm seems to be riding in the Italian-Spanish style (as seen in the later Crispin de Passe's images or  Velazquez' portrait of Felipe IV) , dressed in the courtly riding attire, sitting at ease well mounted on a spirited but collected Spanish? stallion. The rider is not a warrior, but master of his mount, perhaps in this print he also serves as a fine example of the courtly art of horsemanship.
They, the ruler and his steed, cast  a splendid figure together,  amid the bucolic and prosperous landscape of his realm.
But below
Frederic V, prince-elector of Palatinate, and king of Bohemia

Duke and king, short-while though, Frederic is a different matter. He is a warrior (cuirassier armor and with his broadsword at hand), military leader and statesman (Prague behind him and the marshal staff in his hand) mounted on a stallion moving in passage or parade trot. The stallion appears to be, from his conformation, a Turkish one, neighing and very spirited, but his tail tied to show it is a warhorse. His mount's tack is perhaps a mixture of the English and Imperial traditions.
His riding is military (the bridle is curb-bit with two-reins, as preferred by the cavalrymen) and full of action and bravado, closer to the ancient Greeks than the Italian-French schools of horsemanship.
Unfortunately for this rider, he rode nowhere, as his Bohemian kingship lasted but a year (he was a duke of Silesia too - Silesia being mostly the Bohemian Crown fiefdom- it thus makes him a bit 'our' that is a Polish lands ruler), and he also lost his ancestral holdings, becoming a fugitive lord depended on the Lion of the North until his untimely death at Mainz in 1632.
enjoy
Posted by Dario T. W. at Monday, November 21, 2016