Salve,
today we will turn to the images of horses painted by messer Roelandt Savery, Flemish-Dutch  painter active in Europe during the first half of XVII century, and who was a painter in the Flemish tradition of Peter Breughel the elder and ''his school'' and perhaps a disciple, clearly influenced by, of another famous Dutch artist Gillis van Coninxloo.

Here a detail of van Coninxloo's painting, Landscapes with a scene of life of St. Paul, showing  riders and their horses, including one that is mounted on a dun horse and who looks a lot like the Polish, Hungarian or Croatian light cavalryman, especially his arms and costume - short blue żupan,  and a sabre perhaps. 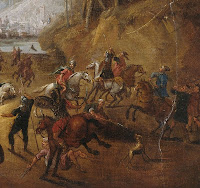 Messer Savery was a prolific painter, who achieved fame, wealth and prestige in the Dutch Republic and an apparent lover of nature visible through his landscape paintings. Nowadays he is still know because of his drawings and paintings of the extinct dodo bird.

However, dodo is just a tiny part of messer Savery's  legacy, as he was a remarkable painter of horses and historical subjects, especially since he lived through the the Dutch-Spanish Wars and the Thirty Years War.

First the horses, often amongst other animals, showing Savery's mastery of the animal form:

. a dapple stallion - a beautiful example of a Baroque horse, Spanish or Spanish influenced 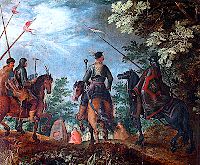