Col. Greenwwod on the issue of seat 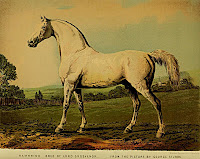 Salve,
in my last entry I introduced colonel Greenwood and his thoughts on horsemanship. In this one I want to share with you colonel Greenwood's view on the seat as given in chapter V of his book. 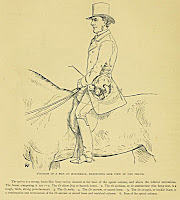 ''There is one direction which, I think, applies to all seats. Turn the thigh from the hip, so as to bring the hollow to the saddle; this places the foot straight to the front, with the heel out and the toe in. Trotting without stirrups, on the thigh only, with the heel down and the toe up, shoulders back, a snaffle-rein in each hand, like a rough-rider, is the best possible practice for sitting. 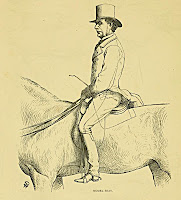 Farther than this I abstain from giving any particular directions about the seat; because, though I consider the rules here laid down for the hands as applicable to every species of riding (I have excepted the soldier with his weapon in his right hand), I think there is a peculiar seat proper to many different styles of riding. The extremes of these are the manége and the Eastern styles, both admirable in their way, and perfectly practical, but each wholly inapplicable to the performances of the other.
What can be more perfect than the seats of M. de Kraut and the Marquis de Beauvilliers, in De la Guérinière’s work, or the engraving of M. de Nestier? But I do not think that a man in such a seat would look well, or perform well, in a five-pound saddle, over the beacon course: still less that he could lay the reins on the neck of a well-bred horse, and at full speed lie along his horse’s side, and with his own body below his horse’s back, prime and load a long Persian gun, jump up and use both hands to fire to the right or left, or over his horse’s croupe; or that he could wield a long heavy lance with the power of a Cossack; or at full gallop hurl the djerrid to the rear with the force of a Persian, and again, without any diminution of speed, pick it from the ground. 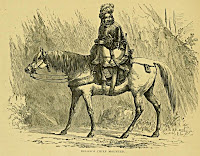 On the other hand, his peculiar seat renders the Eastern horseman so utterly helpless in the performances of the manége, that he is unable to make his horse rein back, or pass sideways a step. And I have seen three hundred Mussulman troops from the northern parts of Persia (each of whom would perform forty such feats as I have mentioned) take more than an hour to form a very bad parade line, in single rank. When one of them was the least too far forward, or had an interval between him and the dressing hand, however small, as he could neither make his horse rein back, nor pass sideways, he was obliged to ride out to the front, turn round to the rear, and ride into the rank afresh, and so in succession every man beyond him. This was an affair of seat; the Eastern horseman’s leg does not come low enough to give his horse what are called sides.
On sides depend reining back and passing; on reining back and passing depend closing and dressing, and consequently the power of acting in line. On sides also depends the central wheel of threes on their own ground. This is an invaluable attribute to cavalry, regular or irregular. On the plain, the central wheel of threes affords the only true principle of correcting intervals between squadrons, regiments, or brigades, whether in line or in line of columns. Threes also supply the most perfect principle of retiring in line in the presence of an enemy, with the power of instantly showing front, provided that (according to regulation) leaders are appointed to the rear, the same as to the front. In the defile, for advanced or rear-guard movements, threes alone afford the power to occupy the entire width of a lane, road, street, or defile, with the perfect facility of constant and instant alternation of retiring and advancing. Without some central wheel, columns or divisions occupying the width of a road or street, can not retire; or when retiring, cannot show front to the enemy. With reining back and passing (and they are easily acquired) irregular cavalry might move with the precision of regular cavalry. 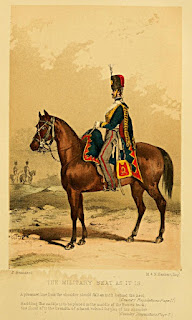 I should say, that the most perfect seat for the manége should be shortened for the soldier to give him power with his weapons; that the military rider should take up his stirrups when he goes hunting; the hunter the same when he rides a race; and for tours de force, I consider the short stirrup-leather and the broad stirrup-iron of the East indispensable—they give, in fact, the strength of the standing instead of the sitting posture. The Cossack retains this standing posture even at a trot; few Eastern horsemen allow that pace at all, but make their horses walk, amble, or gallop.

The English hunting seat is, in point of length, the medium of those mentioned; and perhaps that seat, or something between that and the military seat, is the best adapted to common riding. It unites, in a greater degree than any other, ease, utility, power, and grace.'' 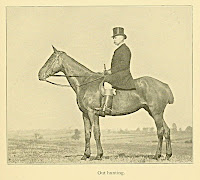