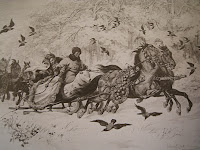 Salve,
It is winter time in the Northern Hemisphere and in the olden days our ancestors in Europe (and to some extend in North America) used sleigh as transport vehicle, and in the Old Poland lands this was time for for going hunting and''kulig'' or a sleight party :)

Kulig described
In a short time the court was filled with sledges, and the saloon with guests. The ladies were all dressed in the costume of their villagers, and accompanied with their husbands, cousins, or admirers, all likewise dressed as the peasants of the neighbourhood. Madam Wabinska received them with a gladness and welcome that could only come from the heart, and had a compliment ready for every lady or gentleman, sometimes upon their dress, at other times on something else, but all delivered with that grace, which we can admire and appreciate, without being able to imitate, and which belongs exclusively to the ladies. The table was already covered, and the guests, when assembled, had nothing more to do than to sit down to their light repast, before proceeding farther, as they well knew that Kurowo was not the end of their journey. The house of Madam Wabinska was only the rendezvous; the horses had ten good English miles to travel further before they reached their goal.
[...]
The judge mounted the same sledge with a young widow, to the great mortification of a young gentleman, who had already, in anticipation, occupied the seat. The musicians were all placed in the first sledge, and although not one of them knew how to play a rondino, or a rondolletto, yet they knew how to please the travellers, and played la polonaise of Kosciuszko.
The principal sledge, and that which followed immediately after the musicians, was covered with Turkish tapestry, and built in the form of a stag reposing in the midst of a forest after a tiresome chase. The head, formed of wood, and turned towards the horses, was adorned with real antlers, the numerous tines upon which gave them the appearance of two trees stripped of their leaves by the wind. The pedestal, upon which the stag reposed, and which represented the green sward, was supported by four little pillars fixed in the skates, about four feet distant from each other, at the end furthest from the horses, describing a half circle, and narrowing by little and little until they approached the front of the sledge, where they were united, and terminated in a gilded ball, elevated a little in front of the stag's head. These skates serve in place of the wheels of a carriage, and enable the sledges to slide along upon the frozen snow. The back of the stag was hollowed out in such a manner as to allow two persons to sit in it; and behind, upon the extremities of the skates, stood a servant, who guided the horses, crackling his whip, at the end of which was fixed a red ribbon, making a noise in the wind blowing keenly from the north.
Felicjan Andon Wolski – A sledge party in Poland 1830 (Glasgow, 1835)

A JOURNEY BY SLEIGH
FRED BURNABY
"BRING out another sleigh," said my friend. "How the wind cuts! does it not?" he continued, as the breeze, whistling against our bodies, made itself felt in spite of all the precautions we had taken. The vehicle now brought was broader and more commodious than the previous one, which, somewhat in the shape of a coffin, seemed especially designed so as to torture the occupants, particularly if, like my companion and self, they should happen to be endowed by nature with that curse during a sleigh journey — however desirable appendages they may be when in a crowd — long legs. Three horses abreast, their coats white with pendent icicles and hoar-frost, were harnessed to the sleigh; the centre animal was in the shafts and had his head fastened to a huge wooden head-collar, bright with various colors. From the summit of the headcollar was suspended a bell, while the two outside horses were harnessed by cord traces to splinter-bars attached to the sides of the sleigh. The object of all this is to make the animal in the middle trot at a brisk pace, while his two companions gallop, their necks arched round in a direction opposite to the horse in the centre, this poor beast's head being tightly reined up to the head-collar.
A well-turned-out troika with three really good horses, which get over the ground at the rate of twelve miles an hour, is a pretty sight to witness, particularly if the team has been properly trained, and the outside animals never attempt to break into a trot, while the one in the shafts steps forward with high action; but the constrained position in which the horses are kept must be highly uncomfortable to them, and one not calculated to enable a driver to get as much pace out of his animals as they could give him if harnessed in another manner.
Off we went at a brisk pace, the bell dangling from our horse's head-collar, and jingling merrily at every stride of the team.
(1904) 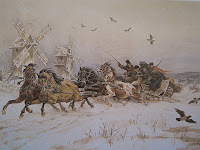 Sights of Saint Petersburg:
If we stand in any frequented part of St. Petersburg, and watch the passing crowd of shaven and unshaven Russians, the latter predominating according as it is a more or less fashionable quarter, we observe as great a variety in the appearance of the vehicles which whirl them by, as in those who ride within, or constitute the stream of foot-passengers. In the winter season, when St. Petersburg is in its glory, let us take the corner of the Nevsky prospect.
...
The old body of a chariot placed upon a sleigh without its wheels, is rapidly whisked past by four rough-looking little horses, wiry and uncouth as the rudest of Welsh ponies, with long ragged tails and manes. Two footmen, in furred greatcoats, with enormous cocked-hats, stand behind the carriage; a coachman, bearded, caftaned, and wearing the quadrangular velvet cap which distinguishes his profession, sits on the box, the reins in both hands, without a whip. One of the leaders is mounted by a boy dressed like the coachman, sitting on a high Tartar saddle, the skirts of his ample caftan being tucked round his legs. This may be a minister, a counsellor of state, or some man high in office, driving to the palace. His dingy equipage shows the negligence to externals of the man in power. His four horses are not worth forty pounds; but these are the hacks which save his fat, sleek, showy nags, of which he has many sets. These horses are harnessed according to the fashion which the Russians have derived from their former Tartar conquerors. The collar is very light, so are the breeching and traces, and all of black oiled leather, which, in dry weather, wears eternally. In the mouth, the horse has nothing but a snaffle.
[...]
Then dashes by us, at an astounding pace, the bearded coachman shouting as he drives along, a light
sledge, of polished walnut or maple wood, scarcely heavier than an arm-chair. The horses are bright bay or jet-black, glossy in coat, and so sleek and fat, that the near horse, as he canters or gallops along, covers the trace with foam ; for the near horse gallops always the same shoulder foremost, his neck being rounded, from his head being strapped down, so that his long mane almost trails in the snow. The off horse in reality draws the vehicle. He is harnessed between shafts, and these shafts are held forcibly apart, so as to yield him some support, by a bow about the thickness of a man’s wrist, which rises high over his head, above the collar, and to which he is bound by a bearing-rein. This horse trots, whilst
the one beside him canters, and the effect is very graceful, when the galloping horse, or pristastcluz, is
showy; but it is painful to behold, when the curb of the neck, instead of appearing natural in a fiery animal, is evidently torturing some worn-out brute, which flounders wearily along, as is so often the case. In this sledge sits an ofiicer in the guards — a Russian nobleman — enveloped in the light bluish-grey cloak of the Russian army, with a collar of the beautiful fur of the sea-otter muffling up his face, and a white cock-tail feather streaming from his preposterously large cocked-hat. He is a man of family and fortune ; his conversation will amuse you for an hour; he appears high-bred and gentleman-like ; but converse with him for a thousand hours, and the theme is always the same — champagne, cards, and French actresses.
...
Next […] vehicle is also driven by a Russian bearded coachman ; but it heavy and gaudy old harness, in the English fashion, fastens the horses to the pole. The horses themselves have a touch of the heavy Mecklenburg breed about them. They are nicked, and retain the smallest imaginable stump of a tail. If there are four horses, a heavy postilion, parodying the costume of an English postboy, sits in his saddle like an Austrian dragoon.
...
he next is the equipage of a Russian magnate in all its glory […] The horses, light-limbed, arch-necked, and sleekcoated, show all the useless points of breeding, and the skillful grooming of their dark, glossy coats, shows off the light and elegant harness, which is relieved by silver ornaments and studs, like the cowrie-shells on the Morisco bridles. But perhaps one of those gorgeous footmen standing behind the carriage shows the toe of his foot coming through his boot, one of those showy horses wants a shoe, and some part of the brilliant harness is fastened with a piece of rope.
By Richard Hildreth (1843) 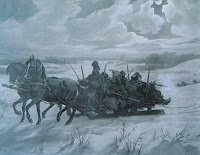 Of the sleigh horses:
The fast trotters are a breed in common use for hackney carriages and winter sleighs: their movement consists in trotting with the fore-legs and cantering with the hinder, proceeding at this rate fifteen or sixteen miles an hour. There are some of them higher bred that will go the pace of twenty miles, but how long they can keep it up is not quite satisfactorily ascertained. These animals are rather long for their height, very well shaped, with a square head, and mane so exuberantly long*, that their masters knot them up to keep them from trailing on the ground.
*This long-maned race is extensively spread towards the south into Poland, the Ukraine, and Podolia, there being, in the Dresden Museum, a stuffed specimen; it had belonged to the last Saxon king of Poland (Augustus III of Saxony), and had a mane which measured twenty-four English feet in length, and the tail thirty feet.
Charles hamilton Smith et al (1841)

Paintings attached are by pan Juliusz Kossak, one of the most amazingly talented and prolific horse painters of XIX century