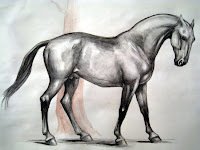 I am working on some horse illustrations for my friend Radek Sikora - for his book - 'Na skrzydlach husarii'-
I started sketching this horse Sunday, and perhaps I will use this sketch :) although it will need saddle, shabraque, wings attached to the saddle etc. Soon I will post some more progress sketches.
to be continued
Posted by Dario T. W. at Tuesday, October 21, 2008