Magi from Menologion of Basil II, emperor of Romaioi

so today we celebrate the Feast of Epiphany.
In this blog tradition let me share some images related to the Adoration of Magi.
This time I will share some images from the Menologion of Basil II, the warrior emperor of Romaioi(Eastern Romans) of the Macedonian dynasty, also known as the Bulgar slayer. But he also fought the Fatimid Empire, destroyed the Khazar khanate (in cooperation with the Kievan forces), and , and re

and along this religious theme of the Adoration of Magi  we can observe two images of horses and horse tack, and even saddles from the period - circa 975 AD of late X century - also a mule or a donkey ridden by St. John Chrysostom. 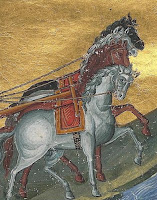 and Basil II in his glory 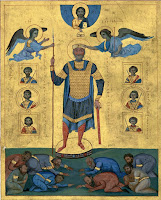 and his empire crica 1025AD - largest since the Islamic and nomadic conquests.

this good period was to begin to unravel in 1071, the year of the great defeat.

Osprey Publishing has several books dealing with the cavalrymen of the Macedonian dynasty period in the Byzantine history. Tim Dawson is the author of one of them - Byzantine Cavalryman of 900-1206AD.One of his articles- Byzantine soldiers' equipment - is freely available.